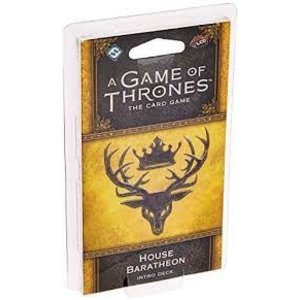 Join the battle for the Iron Throne with the House Baratheon Intro Deck for A Game of Thrones: The Card Game! This pre-constructed deck introduces you to the mechanics and key characters of House Baratheon to provide a stable foundation and highlight the faction’s unique features. The perfect entry point for players new to A Game of Thrones: The Card Game, the House Baratheon Intro Deck contains sixty-nine cards that offer every card you need to begin your battles right away, whether you are squaring off against other intro decks or custom decks built by other players.By holding on to power and forcing your enemies to kneel before you, all of Westeros will respect that yours is the fury.

This is not a standalone product. It is a pre-built deck that requires the tokens and rules from the A Game of Thrones: The Card Game Second Edition Core Set to play.