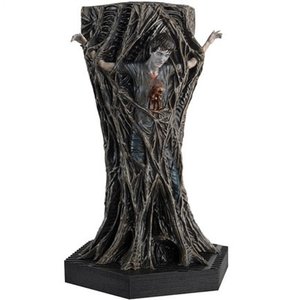 Add to comparison Add your review
A gruesome figure of Mary from Aliens 1986 film is the latest figurine to don the Alien & Predator Figurine Collection. When the colonist population of LV-426 is attacked by xenomorphs, not all of them are killed. Instead, they are cocooned inside honest and impregnated with alien embryos. Those with no means of escape are doomed to suffer until a chestburster fatally emerges from their bodies, the creatures scurrying away to become the newest member of the alien horde. The figurine captures Mary a colonist living at Hadley's Hope on Acheron with a chestburster erupting from her chest; the chestburster resembles a large beige coloured worm. Product Details - Character: Chestbuster Victim Movie: Aliens 1986 Licensor: 20th Century Fox Manufacturer: Eaglemoss Collections Type: Figurine Material: Metallic Resin Height with Base: 12.9 cm Product Weight: 139g Packaging: Full-colour window box Language: English
0 stars based on 0 reviews Add your review