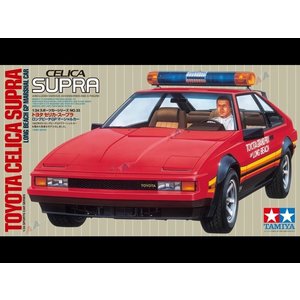 This re-issue model kit recreates the classic Toyota Celica Supra from 1983, which depicts a special version of the Celica Supra that was used as the race marshal’s car in the 1982 Formula One race held in Long Beach, California, USA. Its tuned engine produced 230hp and a top speed of over 230km/h. The car made for a thrilling sight as it bombed around the circuit, thanks to over-sized fenders and a sporty rear spoiler!• 1/24 scale plastic model assembly kit.• Depictions of the roof-top lights, rear spoiler and exaggerated wheel fenders included.• Dedicated decals included.• Interior features separate seat parts and center console with individual gearshift and parking brake components.• Driver figure included.• Note: This kit does not include parts for motorization or the Yamaha Beluga moped, which were in the original 1981 release.